Manila, Philippines—Ayala Land Inc. (ALI) earned a net income of P5.56 billion in the first quarter of the current year, 18% higher than the P4.71 billion it posted in the same review period last year.  The company’s sustained income growth is expected to contribute to its forecasted earnings of P40 billion by 2020.

“…we remain committed to launch over P100 billion worth of projects to support our targets for the year,” said ALI President Bernard Vincent Dy in a disclosure, dated May 8, 2017, at Philippine Stock Exchange (PSE).

ALI is set to launch three estates this year: the 200-hectare Evo City in Kawit, Cavite, the 25-hectare Azuela Cove in Davao City, and the 35-hectare joint-venture project covering Pasig City and Quezon City with the LT Group.

The Evo City in Cavite is envisioned to become a prime central business district, the first of its kind in this community.  It will feature a balanced mix of high to mid-rise commercial and institutional developments, including the company’s signature Ayala Malls, a hotel, a hospital, and a church. 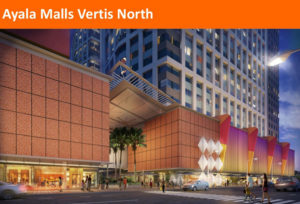 Aligned to its 2020 target, ALI will likewise continue to focus on its leasing business, which contributed 38% to the company’s first quarter income this year.

Ayala Malls have lined up six shopping centers this year, including the recently opened Ayala Malls The 30th in Pasig and Ayala Malls Vertis North in Quezon City, which opens next month.

To further boost its hotel and resorts businesses, ALI has opened B&Bs at Lio in Palawan and Seda Vertis North in Quezon City.

The company spent P21.8 billion its project and capital expenditures in the first quarter of 2017.  Of the total capital expenditure, 46% was allocated on the completion of residential projects, 37% on commercial leasing projects, 14% on land acquisition, new businesses, services, and other investments, and 3% on the development of its estates.