To be completed in 2019, the Century Diamond Tower is a Philippine Economic Zone Authority (PEZA)-accredited building and has a net leasable area of 58,618 square meters.

“I am happy to note that our pipeline of projects under CPG’s business platform of for-lease properties are well-equipped to cater to the needs of discerning office locators. With Leechiu, we expect locators from multinational corporations to the business process and knowledge process outsourcing (BPO and KPO) sectors,” says CPG COO Marco Antonio.

From Leechiu’s side, Executive Director Phillip Anonuevo says, “We are excited with this project because of its accessibility. It is closer to EDSA [a major highway in Manila] than many parts of the CBD. Accessibility remains to be one of the top considerations of companies. Companies cannot go wrong with a well-designed building in a good location.”

The Century Diamond Tower is designed with the latest building features including the variable refrigerant flow (VRF) air-conditioning system, a building automation system, 100% backup power with redundancy, and fire detection and alarm systems. It has more than 650 parking slots distributed across 11 parking floors.

The office building also stands alongside the signature towers of Century City: Gramercy, Knightsbridge and Milano Residences, as well as Trump Tower Philippines.

Join the Metro Manila-Wide Earthquake Drill on June 22 at 9 a.m. 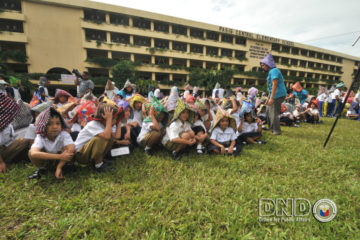