Manila, Philippines—Ayala Land Inc. recorded a 12% increase in net income at P15.2 billion in the first six months of 2019. Its total revenues also increased by 4% at P83.2 billion during the period.

The hike was driven by the sustained growth of the company’s property development business led by office sales and commercial space rental.

“We continue to benefit from the strong economic growth of the country. Results from our various business lines continue to be good, with notable performances in our leasing portfolio and the sales of office condominiums and commercial lots. Moving forward, we remain positive on demand across all market segments and plan to increase the level of product introduction in the second half of the year,” said Ayala Land President and CEO Bernard Vincent Dy.

However, residential development revenues registered at P44.5 billion, 11% lower than the previous year mainly due to the full sell out and completion of successful projects by the Ayala Land Premier and Alveo brands. Meanwhile, the Avida and Amaia brands continued to exhibit growth from the revenues of its ongoing projects. Avida generated P13.6 billion in revenues, 28% higher than P10.6 billion last year. Amaia, on the other hand, recorded P3.7 billion in revenues, a 19% increase from P3.1 billion in the previous period.

Sales reservations remained steady at P72.3 billion as local Filipinos continued to drive demand, comprising 70% of the total buyers. This was supplemented by the sales from Overseas Filipinos comprising 13% while sales from other nationalities amounted to 17%.

Meanwhile, the company’s shopping centers’ revenues grew 12% at P10.3 billion, supported by same mall revenue growth of 11% given the increased contribution of Ayala Malls Feliz, Circuit Makati, and Capitol Central, which is supplementing the strong operations of Glorietta and Greenbelt in Makati, and Ayala Center Cebu.

Megaworld to Open Eight New Malls in The Next 3 Years

Eco-Friendly Hotel to Rise in Boracay 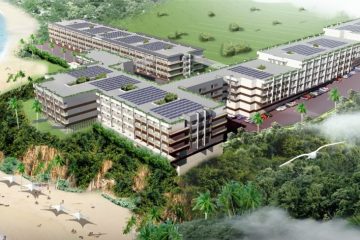