Manila, Philippines—Makati City’s Forbes Park, Urdaneta Village, Dasmariñas Village, Bel-Air Village, San Lorenzo Village, and Magallanes Village are some of the most exclusive, most expensive gated communities or subdivisions in Metro Manila.  Any of these upscale residential communities is considered a smart investment because their land values appreciate over time.  Bel-Air Village, as a case in point, was originally valued at P15 per sqm in the 1950s; its land value today is pegged at around P175,000 per sqm.

Below, let’s get to know more about these low density, posh enclaves:

Established in the early 1940s, Forbes Park, which was named after American Governor-General William Cameron Forbes, was one of the first villages to be developed by Ayala Corporation.

Urdaneta Village was developed by Ayala Corporation in 1958.  With a total area of 73.7564 hectares and a population of 3,500 residents, this gated community is one of the smallest villages in Makati City. Urdaneta Village and Bel-Air Village used to be just one village, called Beldaneta.

Urdaneta Village is a very private subdivision, which strictly prohibits the operation of commercial institutions in its neighborhoods.

Dasmariñas Village or Dasma has a total land area of 187.21 hectares; it is surrounded by EDSA to the north, McKinley Road to the northeast, Forbes Park South to the east, and the Ecology Village to the west.

Dasma, which is known for its tight security and tree-lined streets, has two parks, the Campanilla and Mahogany Parks.

Colegio de San Agustin is located inside the village.

Also developed by Ayala Corporation, 171.21 hectare Bel-Air Village is located on the northern side of the Makati Central Business District, which has three phases made up of 32 streets and 950 lots.

The gated community was named Bel-Air in honor of its first residents: members of the Philippine Airlines Pilots Union who pursued adding the word “Air” to the village’s official name.

San Lorenzo, one of the richest barangays in the Philippines and home to one of the largest private leisure parks in Metro Manila, has a total land area of 63 hectares.  Assumption College is situated within its premises.

Lastly, Magallanes Village is one of the smallest, yet one of the richest subdivisions in the Southwestern part of Makati City. It has a total land area of 119.95 hectares and has over 6,000 residents—almost half are expatriates.  It is near the SM Mall  of Asia complex, Solaire Resort and Casino, and Resorts World Manila.

6 Tips For Getting a Home Loan 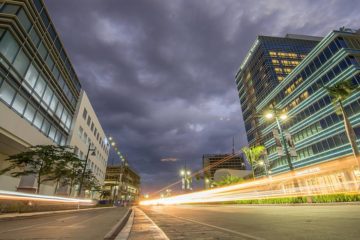